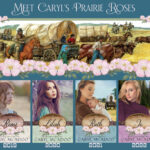 I am so excited to have twelve awesome authors participating the this Fourth annual 2022 Prairie Roses Collection! I first organized it back in 2019 as a Mother’s Day multi-author project, commonly known as a MAP these days and readers seem to love them. They also give authors the opportunity to reach new readers and the titles a broader market reach.

The Prairie Roses are those strong and courageous women who left civilization behind to go West with t heir husbands and families to settle a new land. Even though I’ve written several covered wagon stories now, I still can’t begin to imagine all the hardships those brave ladies faced on their journeys!

This year will be my fourth story, JO—her full name is Jolene, but she goes by Jo. She’s a sixteen-year-old parchment maker and calligrapher being reared by her grandfather after a tragic incident took her parents’ and grandmother’s lives. Plus she travels a new trail as she’s persuaded her grandfather to move to New Mexico (well, it wasn’t a state back in 1850—not until 1912) for his health, so they take the Santa Fe Trail. So it was an all new and different story from the rest.

REMI, my 2019 first Prairie Rose contribution, is a twenty-three-year-old, spoiled introvert who is forced from her mother’s home and nonchalantly decides to search for the father she’s never known in California. She never dreams of the troubles ahead as she journeys with an indentured bond-servant woman as her helper on the California Trail.

In 2020, I wrote LILAH’s story. She a young teenager—a daddy’s girl—who’s lost her father and is being made to leave the only home she’s ever known by the abusive uncle who forced her mother to marry him and he’s taking them North West on the Oregon Trail. First rattle out of the box, she proposes to a man she barely knows, desperate to get out from underneath her uncle’s care.

Then sweet RUTH is my 2021 story. She’s found herself in a family way without the benefit of a husband and is fleeing shame and scorn, seeking a new life for herself and her baby girl. She is literally at the end of her ropes (and money) when the untimely death of a goat saves her. A young teen is searching for someone who has another goat or cow to milk to feed her baby brother whose mother died birthing him. Her widowed father hires Ruth as a wet nurse to go West with him on the Oregon/California Trail.

So you can see, all my stories—though they have the theme of a covered wagon journey—are each very different and unique. Researching for this series has been my almost favorite, second only to my Biblical fiction. I did mention last month that JUST JUDGMENT The Three Days Jesus Did Not Spend in the Tomb was  launching on April 8th, and that has happened! 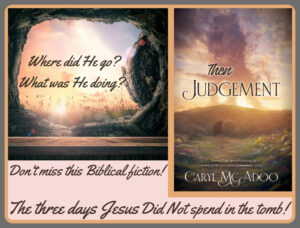 I hope you’ll try both the Prairie Roses Collection (there are a total of twelve new stories this year!) and THEN JUDGMENT! I believe you will enjoy both! 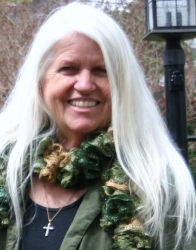 Caryl McAdoo
Award-winning Author Caryl McAdoo prays her story brings God glory! And her best-selling novels are blessed with a lion’s share of 5-Star ratings! With forty-four-and-counting titles, she loves writing as well as singing the new songs the Lord gives her—listen to a few at YouTube. She and husband Ron share four children and eighteen grandsugars. The McAdoos live in the woods south of Clarksville, seat of Red River County, in far Northeast Texas, waiting expectantly for God to open the next door.