In His Amish Sweetheart, the Petersheim Brothers series book 3, Austin Petersheim opens a market with a bakery, and they have cinnamon rolls, made by Hannah Yutzy, of course! Twins Alfie and Benji are up to their necks in mischief, and even though a spying scheme goes wrong, they still get a medal from the mayor! Will Alfie and Benji be able to convince Austin to marry his childhood best friend, Hannah Yutzy, or will the twins be stuck in the cellar for the rest of their lives?

His Amish Sweetheart is a standalone book, but you might want to read Andrew and Abraham to see how the twins used smoke bombs, a little blood, chickens, and a flop-eared dog to find wives for their two eldest brothers. Austin is their next victim! 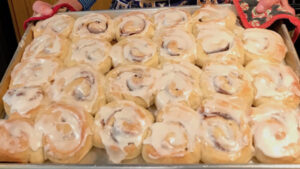 from His Amish Sweetheart

These are the best cinnamon rolls in the entire world. Making cinnamon rolls from scratch is a little time-consuming. But I love the idea of watching something so fantastic emerge from simple ingredients. I make these in Austin’s Amish market, so I thought I would share them with you today! The batch I make will give you about 40 regular sized cinnamon rolls. If you do jumbo cinnamon rolls, you will get about 20. You can definitely halve this recipe if you aren’t feeding the masses.

This recipe starts with the biggest mixing bowl you have on hand. If you are doing a half batch, you can use a smaller bowl or a KitchenAid for all you people who use electricity.

2 cups mashed potatoes (plain or only lightly seasoned with salt)

Sugar and cinnamon for spreading over dough

5 TBS. milk or half and half, whatever you have on hand

Instructions: Scald your milk.  Scalding milk means to bring it almost to a boil, A foam will start to form around the edges and on the top of the milk when it is ready.

Scalded milk is wonderful for melting butter, and it draws out the flavor of things like vanilla and cinnamon. It will also serve to keep our dough warm so it will rise even in the winter. These are wonderful gute on Christmas morning.

After you scald your milk, immediately remove 1/2 cup of milk and place it in the refrigerator to begin cooling. You will use this 1/2 cup to dissolve your 3 tablespoons of yeast a little later.

Mix the scalded milk with the butter and mashed potatoes. You will want to whisk this or mix it with your electric mixer, for all you non-Amish folks, so that the potatoes are smooth in the liquid instead of big and chunky. Small bits of mashed potato are fine.

I know you are now looking at a giant bowl of liquid, but don’t panic. It’s going to be magical!

At this point remove the 1/2 cup of milk from the refrigerator. Make sure that it is cool enough for your yeast. Liquid that is too hot will kill your yeast. The liquid should be lukewarm or a little bit warmer, about 110°. Put the yeast in the milk and give it a quick stir. Then set it aside.

Return to your giant bowl of liquid and make sure it has cooled enough for you to add to your eight eggs. Lukewarm is great. Add the eggs and beat well.

Alternate mixing in some flour and then some yeast, I repeat the pattern of milk and yeast three times. I start with flour, and I end with flour. After each addition, you will want to mix your dough. By the end of adding all my flour and yeast, I am using my hand to scoop around the dough in the bowl and come up underneath it, turning it over onto itself. Do this until you have a nicely incorporated dough.

Warning: it will be very sticky.

At this point, cover your dough with a dry clean towel and let it rise for an hour.

If you don’t want to do this whole process on Easter morning, you can cover the dough and put it in the refrigerator after it has risen. The dough will stay completely functional for about 24 hours.

You will want to prepare to roll out your dough by putting plenty of flour down on your surface. Remember how sticky that dough was? Don’t skimp on the flour.

You will need very soft or melted butter, white sugar, and cinnamon.

After the hour, turn your dough onto your floured surface and gently punch it down. Roll it into the best rectangle you can make. The dough should be about a third to a half inch thick.

Now spread a generous amount of butter over the entire surface of your rectangle. Don’t forget the edges and corners.  Follow the butter with a generous sprinkling of white sugar and cinnamon.  When you think you’ve sprinkled enough cinnamon, go ahead and double it. You want CINNAMON in your cinnamon rolls.

Now start from a short end and begin to roll. If you’re dough sticks to the surface use a flat spatula to scrape it up. Roll as evenly as possible.

When your roll is the desired thickness, cut it away from the rest of the dough. You will roll the rest into another batch. You can do the entire rectangle if you want. Your cinnamon rolls will be bigger and will just need to cook longer.

Cut off the ends if they are uneven. Set them aside. I usually have 4 to 7 pieces that I call the “misfits.” I bake them altogether and frost them as best I can. You are not going to want to waste one bit of this dough.

Now slice down the length of your rolled dough, cutting each cinnamon roll to a thickness of a inch to an inch and a half. If you want to make jumbo cinnamon rolls, cut them 2 to 2 1/2 inches thick. Austin’s mamm uses dental floss or thread to cut the dough into rolls. This works like a charm!

You want these to be a nice golden brown when they come out, but they will be incredibly soft. Pillows from heaven!

While your cinnamon rolls bake, mix all your frosting ingredients together. You are probably noticing the butter theme throughout this recipe. Don’t cringe—just go with it. You won’t give it a second thought once you bite into one of these beauties.

Let your rolls cool a minute or two before frosting them—just enough so that the frosting melts slightly down the edges. Heaven.

Helpful hints from Hannah Yutzy
After you slice your rolls, you can place them closely together on a cookie sheet and freeze them. When they are frozen solid, transfer them to a heavy-duty freezer bag, and they will stay in your freezer for up to a month. To bake them, remove them from the freezer and place on a greased cookie sheet. Let them thaw and rise, and then bake. These are good to have on hand in case a neighbor gets unexpectedly sick and you need to take them something right quick.

Try adding your favorite chopped nut to the frosting, I think the nutty flavor pairs fantastically with the cinnamon. 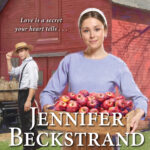 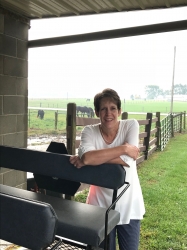 Jennifer Beckstrand
Jennifer Beckstrand is the USA Today Bestselling author of The Matchmakers of Huckleberry Hill series, The Honeybee Sisters series, The Petersheim Brothers series, and The Amish Quiltmaker series for Kensington Books. Two of Jennifer’s books were nominated for the RWA RITA® Award, and she is a #1 Amazon bestselling author. His Amish Sweetheart, the delightfully romantic third book in the Petersheim Brothers series, releases June 28, 2022.