Joe Lockhart had sent Reid an urgent message to meet and had even provided an address. Reid’s knee bounced under the table. He’d been sitting in the Sunrise Café since they opened at six. It’d been an hour, and Joe still hadn’t shown up. Or contacted him. Reid had sent a couple of texts and tried to call. No responses and straight to voice mail. He’d give Joe a few more minutes and then be on his way.

Good thing the diner that had been chosen employed a wide range of characters. He’d spent his time watching everyone. He cast another glance at the front door, hoping to see Joe. The only person he saw was the busboy, who was busy wiping down a table. His hands shook, and he kept wiping at his nose. He was displaying other jerky movements. What was his poison? Meth? Cocaine?

Whatever it was, it wasn’t bad enough for him to steal the tip that had been left. The lady manning the cash register watched him the entire time. She pulled a cup from under the counter and walked to the table as he finished up. She smiled sweetly, put the cup in his dish bin, and then swiped the tip with her other hand before flouncing back to the register.

Moments later, the waitress made a stop at the table and frowned when she didn’t see a tip. She was attractive—strawberry-blonde hair pulled into a ponytail at the base of her neck, green eyes that lit up every time she laughed, and full lips. She was also friendly and courteous to the customers, even the ones that didn’t deserve it.

The older man two booths in front of him had sent his breakfast back three times. Reid would have told him to go home and cook his own meal the second time. But not her. She took it back, smiling each time, ignoring the foul language he spewed.

After his meeting with Joe, Reid would be sure to leave a generous tip, making sure to hand it directly to her. She definitely deserved it. He checked his watch for the umpteenth time since he had gotten here and then drummed his fingers on the tabletop. It wasn’t unlike Joe to be late, but to be this late and without some sort of contact was definitely not like him.

The bell over the door chimed, and he looked up, hoping it was Joe. Instead, a boy, maybe six years old with an unruly mop of red hair, raced to the counter and plopped down on one of the stools, throwing his backpack on the floor beside him. The waitress reached across the counter, trying to tame the boy’s hair.

“Mooooom,” he yelped in embarrassment.

She took her hand away and filled a glass with orange juice before placing it in front of him.

Reid’s phone vibrated on the tabletop. He didn’t recognize the number. He contemplated ignoring it but decided against it. He swiped the screen and put it to his ear. “Reid.”

“Are you at the meet?” Joe’s voice boomed from the other side.

“Where are you? I’ve been waiting over an hour.” Reid let his annoyance be evident in his voice.

“I’m not coming.” The answer was clipped.

“You had me sit in this hole-in-the-wall for an hour and didn’t even bother to call and tell me you weren’t going to make it?” Annoyance turned to anger as he clenched his fist.

“Do you see the waitress behind the counter and the little red-haired boy that just ran in? Quinn Matthews and her son, JJ.”

Joe must be close by and watching if he knew the boy had just shown up.

“Yes, I see them. Along with the druggie busboy, thieving cashier, and ogling cook. What about them?”

“You have five minutes to get them out of there before men come in and try to kidnap them.”

“Five minutes! What is this? What’s going on, Joe?” His pulse pounded as adrenaline coursed through his veins. Joe couldn’t have called to have him get her out sooner. Now, the window of time was dwindling.

“There’s no time to explain. They’re here now. I’ll stall them as long as I can. Get those two out now!” The line went dead.

Great. Just great. He had mere minutes to convince that woman to grab her son and leave with him—a complete stranger. He wasn’t sure his rusty powers of persuasion would work this time, but he’d give it a shot. Joe had saved him several times, and he’d returned the favor on occasion. This was serious business, and Joe trusted him. Reid wouldn’t let him down.

Reid gulped his coffee, burning his mouth and throat, stood, and took the cup to the waitress, who was studying her son as he shoveled eggs into his mouth by the spoonful. A commotion outside the door caught her attention. A black SUV with dark tinted windows was parked in front of the diner. Two large, intimidating men stepped from it. Joe stepped in front of them and wildly waved his arms.

Reid’s chest tightened as urgency propelled him to step between her and the activity outside. He held his empty cup out. “Excuse me?”

“Oh no. I let your cup get empty. Let me grab the coffeepot.” Her cheeks tinged pink.

“It’s not that,” he said, trying to look as embarrassed as she did. “I made a mess with my coffee.”

“That’s okay. Let me grab a towel, and I’ll be right there to clean it up.”

He turned his attention to JJ, who had just crammed an entire slice of toast into his mouth. “Hey there, champ.”

“Hemffo.” The boy tried to speak around the soggy bread.

“JJ, what have I told you about talking with food in your mouth?”

He shrugged and took a swig of his juice to wash it down. “Sorry, Momma.”

“That’s quite all right, ma’am.” Reid turned his attention to JJ. “You look like you could fit under one of those booths. When I knocked my coffee over, I dropped my cell phone under the table. Now, I can’t find it, and I’m too big to crawl under there. Do you think you could look for it while your mom helps me clean up my mess?”

“Yes, sir.” Not only was he willing to help a stranger; he was polite, too.

Reid let Quinn lead the way, JJ followed her, and he brought up the rear, keeping himself as a shield. She got within sight of the booth and spun, then stepped between him and JJ. “Look. I don’t know what kind of game you’re playing, but we won’t be a part of it. Now, you need to pay your tab and leave.”

He lowered his voice, hoping she wouldn’t bring attention to them. “It’s no game. I had to get you and the boy away from the front door.”

She started inching backward. JJ tried to peek around her, but she shoved him behind her. She looked over her shoulder at the small supply closet by the bathroom. Thanks to his hour wait and observation skills, he knew there was a door that would lead to the alley. That’s how he planned to get them out.

He could see the fear in her eyes, so he raised his hands in front of him in a gesture of surrender. “I’m not going to hurt you. My name is Reid Lucas. I’m a private investigator, and I have credible information that you’re in danger. Someone is going to walk through that door and try to kidnap you and your son.”

“No offense, but I don’t believe you.” She jutted her chin.

The bell over the entrance rang, and she leaned around Reid. “Welcome to Sunrise Café. How may I help you?”

Reid turned and recognized the man as one of the men from the black SUV. His stomach tightened. Time was up.

Not bothering to remove his sunglasses, the man scanned the diner, and his gaze stopped on her. Then, he started walking toward them while reaching into his coat pocket. When he pulled his hand out, he held a dark, shiny gun. “You and the boy are coming with me.” 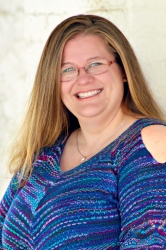