There’s a little thing in the writing world called suspension of disbelief. It’s where an author will ask his/her readers to throw aside logical conclusions in order to buy into a storyline or character responses. This (in my opinion) is the whole bases for fantasy and sci-fi. I’m sure there are authors of those genres who may disagree, and that’s their right. But for purposes of this article, I hope you’ll allow me a little leeway.

It’s natural for me to read a book and use it as a means to improve my craft. I see what works for me and what doesn’t. Often, it’s easier to see the writing flaws in someone else’s work than it is in my own. For instance, after reading several adverb-laden novels recently, it has made me hypersensitive to my own use of adverbs.

You might find it surprising, though, that television shows are also helpful for the creative process. Over the last several years, I have watched more than my fair share. In fact, I credit my hours in front of the T.V. for my good health. I just got a flash of an infomercial touting the ease of losing weight by vegging in front of the telly. Sorry to burst your bubble. I have a home gym (which is just fancy name for a garage with exercise equipment) and every morning my husband and I hit it. Six days a week for 45 minutes adds up to a lot of T.V.

We’ve watched entire series while running on the treadmill or pumping weights: NCIS, Lost, Parenthood, Everwood, etc. Some of these shows are so good at creating deep characters, that every episode is like a mini writer’s conference. This has been especially true for Parenthood. It helps me remember that no character is all good or all bad. Each one, just like real people, are a combination of brokenness and goodness. Right now, we’re going through our second round with Castle. One positive aspect of aging is that we don’t remember things as well, so it’s like we’re watching it for the first time. If you don’t know the premise, it’s about a mystery writer tagging after an attractive (of course) female detective as inspiration for his novels. It has a little of everything—mystery, intrigue, romance, and humor. What’s not to like, right?

This is where the subject regarding suspension of disbelief comes into play. I have a friend who is an ex-police officer. He can’t watch any police procedural because he knows they rarely get it right, and he spends the whole time criticizing it. I can see his point—I’m like that when reading a poorly written book. However, even I know a rookie police officer isn’t going to be taking the lead in a huge bust (which happens all the time in The Rookie). But other than that, I don’t know enough about police procedure to be tripped up by much.

What I do know is this—no police detective is going to wear four-inch heels when she knows she will have to chase down a perp (that’s short for perpetrator for those of you not in the know.) And really, is it even possible for a woman wearing killer heels to run all out after some young guy and catch him? This isn’t Ginger Rogers dancing alongside Fred Astaire we’re talking about. If you don’t know who they are, Google them. Impressive.

Another thing that has me rolling my eyes is when the female characters awaken in the middle of the night or wee hours of the morning in full makeup mode. False eyelashes, lipstick…the works. Better yet, they climb out of the shower without even a smudge on their perfectly painted faces. Really? Is it because the director/creator/producer needs the female lead to be unnaturally beautiful at all times, or are the actresses too fearful of being seen as human as the rest of us? This is part of the reason we women have a hard time believing we measure up. Who can compete with that? And don’t even get me started on their model-perfect bodies.

I realize there is so much more to attracting an audience than authenticity. Most people (including my husband) probably don’t care about these seemingly minor details. Every time I comment—which is often—about how lame it is, I get the look from Chris. He just wants to enjoy the show and focus on his workout. He doesn’t need a play-by-play from me. And though you might find this hard to believe, I can’t help myself. I do a lot of scoffing and snorting which really throws off my measured breathing.

What does grab his attention, along with mine, is when the writers of a crime show leave a red herring that is never explained in the end. For instance, a murder victim is shot in a way that leads the detectives to believe it was a professional hit—closely grouped shots, in the dark, from a distance. Because of this, all the evidence points to a particular suspect. In the end, the perpetrator turns out to be some average Joe seeking revenge for a betrayal. No experience with a gun whatsoever. This little important tidbit is disregarded, but it leaves us asking, “But what about…?”

Suspension of disbelief. I’m not good with it. I’m a black and white sort of girl, and there aren’t a whole lot of shades of gray going on in my head. This is why I can’t write fantasy. I’m too grounded in reality. I like my stories to be wrapped up in nice tidy packages before the end. It’s also why each of my series novels can be read as a stand-alone. No head scratching, dangling red herrings, or unanswered mysteries. 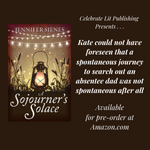 Jennifer Sienes
Jennifer Sienes holds a bachelor’s in psychology and a master’s in education but discovered life-experience is the best teacher. She loves Jesus, romance and writing—and puts it altogether in inspirational contemporary fiction. Her daughter’s TBI and brother’s suicide inspired two of her three novels. Although fiction writing is her real love, she’s had several non-fiction pieces published in anthologies including four in Chicken Soup for the Soul. She has two grown children and one very spoiled Maltese. California born and raised, she recently took a step of faith with her real-life hero and relocated to Tennessee.