March was Women’s History Month, and I discovered that it was declared such in 1911, and Congress made it official in 1981. When such a month is celebrated, we immediately think of the rich and famous…well, maybe not rich, but definitely the famous. I’m reminded of the women who influenced my life, and none are famous in the world’s eyes. I wasn’t inspired by inventors, explorers, entertainers, or women in politics. Not that anything is wrong in that, but my inspiration came from my mother, family members, and godly friends.

That’s why I love the women in my books! They are inspired by people I know. In Restored Grace, Book Two of the Bay Town Series, Carol Scape becomes an inspiration to Bay Town, but she didn’t start that way. In Book One, Shattered Guilt, I introduce her as a minor character. Although her loud personality is not so minor, my critique group loved her so much that I authored Book Two all about her. She’s a worldly woman, who’s lived a wild life, but now lives for God, by serving others.

When I write my characters, I almost always have someone in mind. A friend, a family member, an acquaintance. I start with that person’s character traits, but eventually, they take on their own unique personality. Carol, for instance, was someone I saw at Los Angeles International Airport while I was saying a teary goodbye to my son and his family as they left for the mission field in Japan.

I couldn’t help but notice an attractive older woman. A hippie type. I loved her long flowing red hair and brightly patterned swirling skirt. But what caught my eye was a colorfully, wild, tooled pair of cowboy boots. They were strapped to her suitcase, but she wore an orthopedic boot on one foot and a Birkenstock sandal on the other. My imagination went wild! And I wasn’t even a writer then. That was ten years ago, and now Carol Scape is born. The heroine of Restored Grace.

Her personality flowed from the woman’s appearance at the airport, but it developed from the women I’d known. Hurting women whose flaws led them to make poor decisions contrasted with the strength of women in similar situations who put their trust in Christ. Carol is both. Broken, transformed, and redeemed through the blood of Christ.

Not all women have such drastic transformations, yet those with a gentle and quiet spirit and faithful lives have profoundly impacted my life. Those who you’ll never read about except if I blog about them in my devotions. In their own quiet, uneventful, lives, I have been inspired and encouraged.

My husband’s ninety-six-year-old aunt was one such woman. She passed just last month and was the last, except for his ninety-six-year-old mother of that generation. Aunt Rose was unique in many ways. She served in the military and was the only female at many of her Veteran Hospital events over the last couple of years! She was also one of the first computer techs in her city back in the sixties. But I came into the family and met her as the quiet, wise mother of my husband’s cousin. And later as the Great Aunt (to our children)  who hosted Easter egg hunts, was the president of the garden club, and took me on long walks imparting her wisdom about the wildly cultivated plants on her property.

With Easter consuming my thoughts and heart throughout the spring, I’ve never celebrated Women’s History Month, and yet now I’ll always think of Aunt Rose in the Spring. At Easter as well, primarily because of the fun Easter egg hunts she held. But along with her, I’ll  remember my mother,  and other deceased family members, and those still living — my sisters and friends. They may not wear swirling skirts or wild boots, and they may not be famous, but God has used them to help shape my life, and I’m the better for it. Whoever those historical women in your life are, celebrate them, and give glory to the Lord for blessing you. And most importantly celebrate Christ, giving thanks for His suffering, death, and resurrection. Happy Easter. 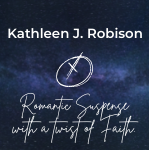 Kathleen Robison
Kathleen J. Robison is an Okinawan-American. Born in Okinawa, raised in California, Florida, Mississippi, and Singapore. Her travels and her family are the sources of many of her settings, plots, and characters. Kathleen and her Pastor husband have eight adult children. Seven are married, blessing them with sixteen grandchildren and counting. Her ethnically diverse background and family of 32 (to date) personalities give life to the stories that tell of God's amazing love amidst the challenges of real life.