Have you read some stories that are so realistic, you wonder if they’re based on true events?

Often authors glean from situations they’ve seen or experienced themselves. My first three novels are based on real people. I also add snippets of personal experiences or interest points throughout a story to add layers to the character’s life.

I’m working on the fourth book in my Single Again series and the MC, Melissa Turner is a photographer. I have a diploma in photography and have done a few weddings back in the day. I remember them being a lot of pressure to get the best shots (you can’t reshoot a wedding) and a full twelve-hour day standing on your feet, smiling as much as the subjects. No thanks. I quickly moved on from that career to marketing and used my eye for composition in another field. Of course, I still like to take photos of my children or nature, but only as a hobby.

The hero in “No Filter” is a single dad and videographer, Chance McMillan. At first, he comes across as prideful, thinking he has better skills and ideas than Melissa. I will make him have some likable traits to balance it out. He is a dedicated father to his little boy. I’ll use some of my stories to make him more relatable.

My little boy has a white scar on his forehead from when his older brother chased him around the house causing the younger one to bang into a door frame. A rush to the hospital had his split forehead glued back together. Ouch. Who has some stories about broken bones or cracked heads? Probably most parents can relate on some level or may have their own childhood stories. Three of my sons have cut their heads on something and one daughter broke her wrist from playing on monkey-bars. How many visits to the hospital have you had?

I thought you’d like a glimpse into how authors come up with their ideas. Last month I mentioned how in book one, More Than a Second Chance, the women the story is based on had her happy ever after in real life. In book four, it will be based on the young woman Cassie helped to keep her baby. Melissa gets her own story. If you haven’t read the first books in the series, they’re now in a boxset and on Kindle Unlimited.

Here’s the blurb for “No Filter” now on pre-order.

Australian, Melissa Turner isn’t afraid to speak her mind. Her fire and spunk surprise Chance, and now he doesn’t want her to leave the US. He offers Melissa a documentary project to extend her stay, but as single parents, could two nations, two broken families build a bridge to a safe middle ground? 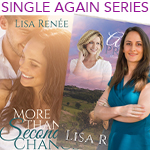 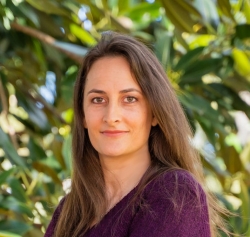 Lisa Renee
Lisa Renée is a member of American Christian Fiction Writers and Omega Writers, Australia.
Lisa adores babies enough to have seven of her own. Recently, Lisa has taken up breeding Ragdoll cats instead of breeding humans.
The tribe lives in Australia, where Lisa and her husband enjoy their writing projects and publishing ventures.