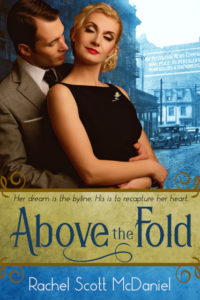 How appropriate that this book is set in 1922, as we now enter the “roaring twenties” of the twenty-first century. Comparisons are inevitable, and to my surprise, as I read “Above the Fold”, I realized that while there has been progress, much remains the same. This story seems timeless in some ways because the conflicts and circumstances translate so well, both on a more superficial human level and on a deeper spiritual level. A mark of noteworthy fiction, this detail goes hand-in-hand with being relevant and applicable to readers. Achieving this with historical fiction further raises the standard.

Rachel Scott McDaniel’s “Above the Fold” triumphs remarkably, no small feat for a debut! I certainly never would have guessed that this was a first novel, as it carries the sophistication of an established writer. From character development to plot execution, this story truly shines, and I am delighted that I had the privilege to read and review it. What initially drew me to the story was the fact that it is set in Pittsburgh, as that is not very far from where I live and I recognized most of the street names, as well as the Duquesne incline. The references to it as a steel industry magnate and the ecological concerns therein continue to be issues of debate today, even after the end of the steel era.

McDaniel’s focus on the newspaper industry offers another facet of the Steel City, bringing attention to journalism and the role of women in post-WWI, Prohibition-era America. Through Elissa Tillman, McDaniel highlights the ongoing women’s suffrage movement in the quest for workplace equality. While not a new theme in and of itself, in this story it dovetails with romance and the human condition to reveal how inextricably linked our identity is with the way in which we approach life and impact those around us. Elissa had been known in school as the “Shadyside Slob” because she was not elegant and graceful, and in adulthood, as she strives to earn a place as a newspaperwoman, she laments that “No man took her seriously. Not Father. Not Adam. And definitely not Cole.” So “[w]hich hurt worse, forgotten or betrayed? The only men she’d ever loved had done both.” Perfectionism results from a desperate need to prove herself. Cole, likewise, battles his own inner torments, able to see himself only through the lens of failure. However, a murder investigation serves as a catalyst for metanoia, demonstrating how the Lord uses even bad situations for good and is truly the God of second chances. She realizes, as we all should, that “Her dreams had been elusive like a breath of wind, but her value wasn’t found in triumphs. Or failures. God’s love defined her…God’s love made her enough.”

I received a complimentary copy of this book through Celebrate Lit and was not required to post a favorable review. All opinions are my own.