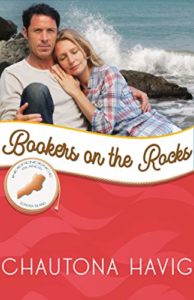 For the first couple of chapters, I wasn’t sure if Bookers on the Rocks was about Mallory (who owns the local bookstore), or Tessa and Ross Booker. Maybe if I had read the others in the series, I would have picked up on that earlier, but I think not knowing added an extra level of depth to the book that I wouldn’t have otherwise had. I grew to love Mallory as much as Tessa and it made me look forward to interactions with her much more than I think I would have otherwise. It also made me cheer on Mallory and her fisherman “friend.”

Bookers on the Rocks was part sweet romance, part fun-loving story, and part in-depth biblical truths to think about long after reading “the end.” In the beginning, Tessa annoyed me. She seemed to complain a lot and was super critical of her husband, in her head. That, in my opinion, is just as bad (or worse) than being overly critical out loud. How can a husband (or person) defend themselves if they don’t know what is being said? All it does is blindside him if she got to the breaking point and it all spilled out. It’s not fair. How many of us do that, though? I, for one, choose to keep my inner dialogue, especially toward my husband as one of thankfulness, choosing to think the best of him and be grateful for the little things, because I don’t want to feed a seed of bitterness or a critical spirit toward anyone, but especially the one I chose to spend the rest of my life with.

Tessa’s overwhelming aversion to romance seemed a bit much. I happen to love romance (although I don’t read strictly romance novels because they truly don’t seem to be written real-to-life). I prefer real-life romance, which, in my opinion, is romance even more. I figured Tessa had deeper issues, because usually when “one protests too much,” there is a deeper reason than meets the eye.

As we got to know Tessa, and her underlying discontent, layers of hurt, and masked feelings, I stopped being annoyed and started sympathizing. How many other wives feel the way she does? How many other wives wish their husbands would understand what they need? Ross was a great guy; although, to be fair, Tessa had trained him to be too dependent on her and that was partly on her. I ended up talking to my husband about this book because I wanted a male’s perspective and he even mentioned the same truth: “You can’t put all the blame on Ross. He was trained to respond the way he did.” Point taken.

However, this book wasn’t depressing because while Ross was trained to be too dependent upon his wife, his love for her spurred him on to change his ways and rekindle their love. And watching him do that (humorously at first, then with more meaning and depth) was beautiful. It showed how most marriages that are good, healthy marriages, while needing to be nurtured and refined over the years, growing with the couple, are not just salvageable but capable of being even better than imagined.

The storyline itself was wonderful. I was drawn in, not just by the topic (I love marriage and all things marriage) but by the way the author described the setting, the characters, and the nuances of island life (something I wasn’t familiar with having never lived on an island). Adding in the secondary stories of Mallory and her fisherman friend and the police officer and the newbie with her son were great secondary storylines. And getting to know Tessa and Ross’ boys was a nice element as well, because even though they were grown and at college, they were still an important part of the family. It reminded me that while I am growing and changing in my marriage, sometimes I have to communicate elements of that with our kids so that they can decide what type of relationships they want to have with their future spouses, etc.

I absolutely loved how the author kept bringing in writing elements to the story. Mallory was helping some of her friends write novels and the different writing words and stories added humor to the book. I really enjoyed that. Maybe as someone who writes novels herself I found more pleasure in it, but I think anyone would enjoy those elements.

I loved also how the couple admitted to their sons at the end of the book how their marriage was “on the rocks” for many years and while they wouldn’t have divorced because of their beliefs, their marriage would not have been so fulfilling as it was when they both decided to focus on loving the other and meeting each other’s needs instead of continuing in the rut they found themselves.

This was a well-written book and it makes me want to read the rest of the Independence Islands books in the series. If you haven’t read Bookers on the Rocks yet, I would encourage you to pick up your copy now. And maybe one for a friend who is married (or planning to get married) as well.

Cheri Swalwell
Cheri Swalwell is a Christ follower who thoroughly enjoys her calling to be a wife, mother, writer and speaker, in that order. Cheri loves to encourage people through her Spoken from the Heart devotionals, Bible study Caring for the Caregiver and other compilation books dealing with the subjects of miscarriage, cancer, and biblical marriage. For a full list of books and where they are sold visit www.cheriswalwell.com. If you want to sign up to her newsletter to stay updated on all the latest news, you will also receive a full-length devotional free, as her way of saying thanks for joining! To read one of her many articles on life from a Christian perspective, visit her blog at www.cheriswalwell.com. She loves to interact with her readers, so send her an email at clSwalwell99@gmail.com. You can “like” her on Facebook as well.

Fiction from the Heart, her fiction line, will be available beginning sometime in 2020.