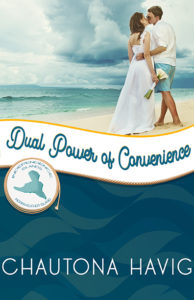 Humorous and heartfelt, Chautona Havig’s Dual Power of Convenience officially inaugurates the Independence Island series, which will feature five islands and six authors over a span of thirty books. This first book is set off the coast of Georgia on the fictional Merriweather Island. A small cast of characters emphasizes the close-knit island community and sweeps readers into the group. Mallory Barrows, a main character from the prequel, appears here as a secondary character whose wisdom pilots her friends, including the newly-arrived Lyla Santana and the island’s billionaire, Richard Danforth. Richard, however, lives in the Middle Eastern country of Azadi, and Lyla is hired for the purpose of inventorying Danforth Hall. Both have sworn off relationships, and a paper marriage seems like the answer to keep others at bay. Until the tide turns.

With endearing quirkiness, Chautona Havig writes stories that are unconventional and that challenge readers to approach life with an open heart of faith. At its core, Dual Power of Convenience is not only a gentle romance, but also a reminder to keep the Lord at the center of our lives. While exploring several common tropes, it diverges from them all to create its own happily-ever-after. Snarky humor and clever repartee, even among the characters’ own thoughts, skillfully offset the more somber moments of past trauma, which is alluded to but not discussed in detail. The Christian element is intentionally subtle for the first half of the story, becoming more prominent thereafter. As Richard says, “Maybe that’s proof of maturity—when your words are truly ‘seasoned with grace’ instead of only making sure they sound like it.”

Readers will connect with the familiar struggle of uncertainty and choosing the right path, a concern that is more prevalent than ever in these times, and they too can come to realize that the most important aspect of any decision, of any relationship, is putting God first.