I’ve been looking forward to Jazzy’s story for ages now. I couldn’t wait to dive in. Jazzy’s struggle between being who she is, and being considerate of others, while a bit more extreme and tangible than for most, is still a common struggle.

When people were clearly uncomfortable with her appearance, she began hiding herself. Her character and personality were still there, but in many ways, by hiding, she stopped being transparent. She did it for them, but in the process, she lost her ability to be comfortable as-is.

Jazzy recognized there was a problem, and began fighting to fix it. To become more transparent and real. When she finally realized she’d never asked God Why-why had this happened, and why did she have to hide, and… And that it’s okay to do so, was very powerful!

Quote: <Why? She’d never questioned God before, just meekly understood that this was her life and that’s just how it was. But why? Why her?>

I mean, how often do we do that? Just accept that this is the way things are, and we have to accept it.

God’s big enough to handle our questions, and our emotions. We just need to remember the difference between Mary’s ‘how is this possible?’ and Zachariah’s ‘how do I know that this is true?’

And then, we got a bonus. Chris’s story. He did voice his concerns to his ‘handlers’ but then he did what they asked anyway. When that ended in disaster, did he do what he knew was right, or did he follow their instructions again? Man, sometimes it’s hard to do the right thing when it’s contrary to popular opinion or your instructions.

The cost is high, whichever way we go sometimes. It’s just a matter of whether we pay immediately, with eternal rewards, or if we take our ‘reward’ now, and pay later.

I felt for Chris, being so caught in his Hollywood persona that he didn’t even know who the Real Chris was anymore. I’m glad he let Mike in, and then Jazzy.

The drug overdose by an offscreen character drove much of the story without overwhelming the reader with the ins and outs of the tragedy that is.

I think the author did a remarkable job, yet again, with getting readers to think and to care, and to have fun at the same time! 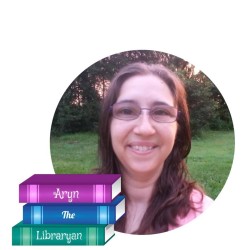 Aryn The Libraryan
Aryn from Aryn the Libraryan has loved Jesus and books since she was very young. Her passion for both sparked the blog she now writes, as well as hours of fun with her 2 little men.

Aryn has recently created a reading journal for turning the fiction you're already reading into a Devotional! She is excited about sharing good books with anyone who will listen, and the privilege of being a stay at home wife and mom. Be sure to connect with her on Facebook, Instagram, and Pinterest!

Latest posts by Aryn The Libraryan (see all)