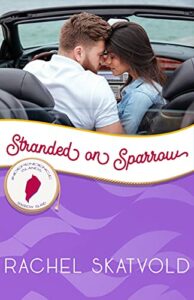 Stranded on Sparrow is written by Rachel Skatvold. This is book 22 in the Independance Island Series. The series is written by multiple authors and are all tied together by the Independance Island theme. I have been fortunate enough to read the entire series thus far – and they are all amazing. While they can all be read as stand alone books, former characters make appearances through the whole series.

Lia Diaz has been constantly comparing herself to her sister. She feels like a major disappointment of the family. She has lost her job  – and is on the brink of losing her apartment. When her sister calls because their grandmother has had a fall, Lia feels this is a time to regroup and reconvene the plan for her life. She always had such great memories on Sparrow Island spending time with her grandmother. However, her grandmother’s house is being repaired after being damaged by Hurricane Arley. Lia is a little bummed to be on Hooper Island instead.

Lia is wrestling with some self esteem and anxiety issues. Her character is relatable. How often have we felt lower than others around us. Lia feels like she has lost her faith and does not feel God is even listening anymore. Zach is a single dad and Nana’s neighbor on Sparrow Island. Nana has become an adopted grandmother to Violet. He is a likable character and is drawn to Lia. He is such a sweet caring man. He is strong in his faith – but has not always been that way.

The author crafts a wonderful reminder of how God has created us in HIS image. He made us and did not make junk. The doubt that we have in ourselves and in our short fallings HE wants to help fill that void. It’s a beautiful reminder that God is the ultimate healer. 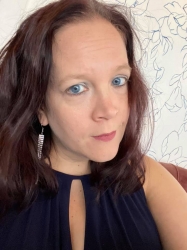 Connie Tillman
Connie has always loved to read. After school she would wait at the local library until her parents would pick her up and she would find herself lost in different worlds through various stories.
Connie is a mother of 4 wonderful children. Two are adults and two boys who are still at home.She is a proud grandmother of a adorable little girl.She also has two fur babies, Amelia Earhart and Theodore Roosevelt.She and her husband Michael live in Southeast Alabama.

Connie has been reviewing books on her blogs since 2016. She loves to read a variety of genres. Her oldest son, Colton has also started to help review books. Connie's blogs can be found: https://becauseisaidsomyadventuresinparenting.blogspot.com/ and https://connieshistoryclassroom.blogspot.com/. She is a history nerd.Connie has a bachelor degree in History with a minor in Religion, and a Master of Arts in History with a concentration in Military History.