Rebekah Jones successfully created a mystery loosely based on the story of Rumplestiltskin. Part of the mystery for me was trying to decide which fairy tale was the basis for The Lost Dutchman’s Secret. Once I figured it out, many things made sense.

Dorothy Hodges is the daughter of Joseph. Apparently Joseph owes a large sum of money to a local businessman who is also a loan shark. He refuses to give Dorothy any details and then makes her responsible for the debt.

Artie is the son of Charles, whom he believes to be an upstanding businessman. Artie and his brother Theo learn much about their father over the course of the story.

Jones brings these two families together in a way that includes matchmaking, disappointment, sadness, anger and joy. So many emotions run through this story and the reader will feel some of them right along with the characters.

Once I knew the end of the story and could look at it as a whole, I was impressed with Jones’ ability to weave an intriguing story taking a few details from a well-known fairy tale. She gave it a bit of an old west and Roaring 20’s twist. 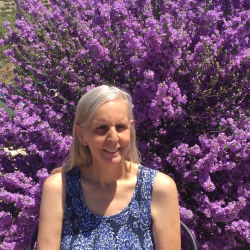 Jane Mouttet
I have a masters degree in Humanities with an emphasis in Children’s Literature from Prescott College. I also hold an ACSI teaching certificate as well as NM teaching certificate with a Library Media Endorsement. I have served as the school librarian at Mesilla Valley Christian School(MVCS) in Las Cruces, NM and Hilltop Christian School in Tse Bonito, NM. I previously taught Children’s Literature courses at Dona Ana Community College. I am a blogger, reviewing books that could find their way into a K-12 Christian school library as well as blogging about other items of interest to school librarians. My husband David and I have three adult children and live in Las Cruces, NM.