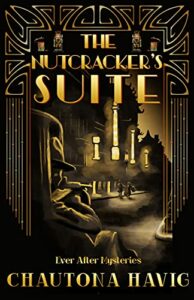 The Nutcracker’s Suite has been one of my most-anticipated reads this season, and author Chautona Havig delivers an enthralling story straight from the Golden Age of detective fiction. Book six in the Ever After Mysteries, The Nutcracker’s Suite stands alone, but followers of the series will be rewarded with Easter eggs cleverly inserted passim—a nod here and there to previous titles. Newcomers, too, will find plenty to engage their senses and detecting skills. Without ever feeling too hasty in its execution, this story takes no intermissions in the action, reminiscent of an actual stage performance. In fact, I was so drawn into it that it only occurs to me now, after having finished this retelling, that I don’t think I have ever actually read the original 1813 Nutcracker and the Mouse King by E.T.A. Hoffman. A later adaptation of it was among my mom’s favorite Christmas stories, though, and Havig’s retelling has affirmed that I need to rediscover this classic!

From the first page, Havig draws readers in and puts those unfamiliar with life in 1920s Rockland, myself included, at ease. A glossary of slang terms, which I did refer to several times, greets readers before the story itself begins, which I love because otherwise it might go unnoticed until the end of the story, particularly in a Kindle edition. Furthermore, these terms transport the audience into the 1920s and add authenticity without being clunky or difficult to understand. The murder mystery introduces intrigue and opens the door to an even more surprising revelation that intensifies the case. I appreciate the various dimensions of the mystery and its solution, and in particular the fact that Havig assembles all of the pieces as the case unfolds, not failing to resolve any of the details.

The characters, however, steal the show. In some ways, Clarice Stahl and Milo Natale, despite being a contrast in opposites and obviously not married, remind me of Nick and Nora Charles from The Thin Man. Clarice automatically won my empathy for her naivete and guilelessness, driven by her Christian faith, and hearkening back to the need for a glossary, Clarice’s relative illiteracy when it came to contemporary slang rivals my own and is refreshing for the old-fashioned among us. Her courage and work ethic are second to none, though, and I love that it is this quiet factory worker who attracts Milo. Milo himself proves to be a tough nut to crack, with his thug demeanor juxtaposed with his endearing habit of speech affected by spoonerisms when in Clarice’s presence. This, combined with the humor common to Havig’s books, balances the gravity of the mystery. Newspaper columnist Lily Barnes is my favorite secondary character, an astute problem-solver and observer of human nature who encourages Milo to pursue a renewed relationship with God, warning him that “almost isn’t enough, Milo. Jesus only accepts wholesale surrender. You remember that.” This sage advice ushers in the uplifting conclusion to the storylines of The Nutcracker’s Suite, a resolution that, as is so often the case in real life as well, only the Lord could orchestrate.

Whether you are familiar with the original story of the Nutcracker or not, if you enjoy an engrossing mystery with clean light romance, humor, and a Christian underpinning, make sure that you read Chautona Havig’s The Nutcracker’s Suite. Bonus points for listening to Tchaikovsky’s “The Nutcracker Suite” while reading, regardless of the season!