Sometimes, the 2nd Time Is the Charm 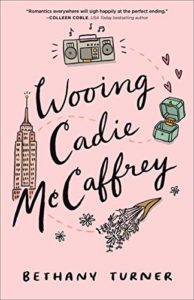 “If it was such a great book, why did it take you over a year to read it?”

It’s a valid question, and one I didn’t know how to answer until I got to the last page. As crazy as it might sound, I think the reason is that I expected to get sucker-punched at each new chapter (and their brilliant chapter titles).

That wasn’t kind or fair of me, either.

You see, I’d read Bethany Turner’s The Secret Life of Sarah Hollenbeck (review), and as brilliant of a writer as she is, I didn’t like that book.  Still, because I’d enjoyed the writing style, I preordered Wooing Cadie McCaffrey the moment I heard about it and began reading within twenty-four hours of its arrival.  A year later, I finally finished, and I’ve got things to say.

Let’s start with… I was right. Bethany Turner is a brilliant writer. Not only does she create characters who come alive on the page and worm their way into our hearts, she also has a killer wit that turns every book she writes into a potential rom-com blockbuster.  Okay, at least it’s true of the two that I have read, and I’m hoping it’s true of her upcoming release, Hadley Beckett’s Next Dish. I’ve already preordered that and am drumming my fingers for its arrival.

As I said, Wooing Cadie McCaffrey offers us lovable characters, but she also gives us impatient, incredibly blind and stupid, self-sacrificing and self-serving characters. Indeed, I’d go so far as to say that Turner is a master of creating flawed characters we relate to because of their authenticity. We’ve all met a Cadie—wanted to be her friend. Everyone knows a Will—and roots for him.

Yet, neither of them feel recycled from previous books.  Instead, Bethany Turner breathes new life into her characters that makes them feel fresh and untried.

I cheered for Cadie when she chose to break off the relationship even while I wanted to comfort Will and rooted for him as he fought to win her back. That kind of immersion into both characters made putting the book down almost impossible. By the second half of the book, I couldn’t. I finished it in an afternoon, risking impending disappointment to do so.

Disappointment never came. Instead, I sat back and reveled in the story of one man’s relentless love for and pursuit of the woman he’s chosen.  Sound like a parallel anyone?

Turner tackles realistic situations, believable mistakes, and the understandable fallout of them, all with the kind of compassion we’d want our best friend to show us in our worst times. She weaves faith so seamlessly into the story that the point—the true point, no less—emerges in a beautiful picture of God’s love for His people.

And she shows just how ridiculous we can be when we try to atone for our own sins by modifying what God has said and already done.

Yes, I was nervous about what I’d think, especially when I read the synopsis and saw, “When a misunderstanding leads to a mistake, leaving her hurt, disappointed, and full of regret…”

I knew what that mistake would be—that regret.  And though nerves bundled in my gut as I read and wondered where she’d take it, I needn’t have worried. Bethany Turner wrote a raw, realistic look at two people and their individual and combined mistakes. She took that and created a beautiful story of redemption and love all wrapped up in a boom box cord and stuffed into an empty ring box.

It may have taken me a year to finish it, but that was on me. Bethany Turner gave me every reason to keep turning every page. Her dedication to writing stories that have not been sanitized into unbelievability makes her heroines women readers can and want to relate to. Her willingness to tackle difficult subjects with a heavy dose of humor and pop culture produces a story that only idiots like me can put down at all. And finally, Turner’s gentle but consistent sprinkling of faith soaks into her readers’ spirits without once making them feel drowned in preachy prose. Five stars all the way.

Follow Me
Chautona Havig
Chautona Havig lives in an oxymoron, escapes into imaginary worlds that look startlingly similar to ours and writes the stories that emerge. An irrepressible optimist, Chautona sees everything through a kaleidoscope of It’s a Wonderful Life sprinkled with fairy tales. Find her at chautona.com and say howdy—if you can remember how to spell her name.

Follow Me
Latest posts by Chautona Havig (see all)